Income from European Games indicate little interest in it 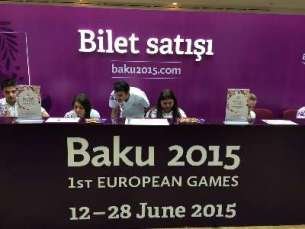 Income from Operations Committee of the European Games in Baku amounted to approximately 15-17 million mantas, the journalists  were told by the Minister of Youth and Sports Azad Rahimov. According to him, it is about revenues from three sources - ticket sales, broadcast rights and sponsorship.

According to the head of the Center for Economic and Social Research Vugar Bayramov, the revenues from the European games are not limited to these sources.

In an interview with Turan, he said that Azerbaijan received indirectly more revenue from the arrival of tourists.

According to various reports, a foreign tourist spends in Azerbaijan weekly $1,000. Therefore, Bayramov said  taking into account a large number of tourists, it can be said that income  surpassed revenues from ticket sales, broadcasting rights and sponsorship.

In addition, the cost  for European Games provide the basis for the strategic future income.

However, executive secretary of the Movement "Republican Alternative" (REAL), economist Natig Jafarli is  of other opinion. He believes that the income figures noted by the Minister shows little interest in European Games.

For comparison, he noted that only two sponsors of the London Olympics - Korean companies "KIA" and "Hyundai" for such rights  paid the organizers $150 million.  Another  $400 million have been  got from tourism.

In terms of attracting tourists, Azerbaijan is pursuing ineffective policies. It is difficult to  attract tourists to the expensive hotels. At the same time, in Baku are only two hostel and very few hotels.

In addition, Azerbaijan creates difficulties for tourists because of the strict visa regime. So, the neighbors of Azerbaijan, Turkey and Georgia, abolished  visas with 100 countries of the world. However, for the period of European games the visa regime was simplified. However, it was a a short-term measure. The flow of tourists often increases after the Games. So, despite the fact that London is an expensive city, after the Olympic Games in 2012  the influx of tourists  increased by 28%.

According to official figures, only the operating costs (without the construction of sports infrastructure) of European games amounted to more than 1 billion manat.