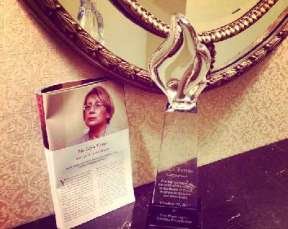 Yesterday, on Wednesday, October 28, OXI DAY foundation honoured Leyla Yunus with the 2015 Battle of Crete Award for her courage to promote the freedom and democracy.

"With the help of people like Bono, Aung San Suu Kyi, former President Bill Clinton, the highest ranking woman in US history, Nancy Pelosi and many others, we at the Washington Oxi Day Foundation work to inspire women in the world today.” is written in Leyla Yunus invitation letter.

"We believe that you, like Aung San Suu Kyi - our 2012 Battle of Crete Award Winner - are a great example of such courage today. You have been nominated by the President of the National Endowment for Democracy, Carl Gershman, to receive this award. We certainly hope that the world's attention to you and your husband's unlawful detention brings an end to it and that you and he can attend this banquet in person.”

The Oxi Day Battle of Crete Award is given each year to a woman who has taken courageous action in an effort to protect, promote or acquire freedom and democracy. The award is inspired by the women of Crete, Greece, who showed tremendous courage in joining the fight against the invading Nazi forces in the World War II Battle of Crete. On May 20, 1941, thousands of Nazi paratroopers descended on the island of Crete in the largest airborne attack of World War II. Only a small number of Allied troops remained on the island at the time, so the Nazis expected the island to quickly surrender. Yet they failed to anticipate the courage of the Greek civilians, including Cretan women, who grabbed farm implements or whatever makeshift weapons they could find in their homes and joined the small force of Allied soldiers on the island in fighting against the invading Nazis. George Psychoundakis, a 21- year-old shepherd who witnessed the invasion said, "Everyone – men and women, great and small – ran to the nearest scene of action to attack the enemy, armed as they were.

Leyla Yunus daughter, Dinara Yunus, received the award on behalf of her mum on October 28, 2015.

The decision on the winner of the Sakharov Prize postponed