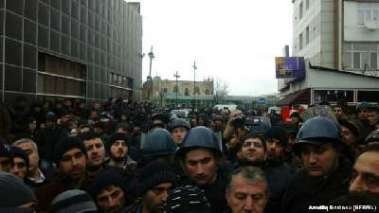 Internal forces dispersed a protest in the evening in Guba with water cannons, batons and tear tools, according to Radio Azadliq. There are detainees, but their number is unknown.

The wave of protests in the regions of the country against the rise in prices has come today to the city of Guba (168 km north of Baku.) According to local sources, about 5000 people gathered in the morning near the bus station, complaining of unemployment and a rise in price. The leadership of the  region  came to  protesting people  urging them to disperse. According to the same sources, most  of protestors are residents of the villages where the social and economic situation is particularly severe. People complain about predatory loans, unemployment and arbitrariness of officials. According to the correspondent of Radio "Azadlig", chief executive promises people to solve their problems. However, people are still protesting. Meanwhile, the city introduced the internal forces that surrounded the protesters. Entry and exit from the city is taken under police control, which checks the entire transport. Early in the morning, police said  there was a bomb  in the local mosque, calling on believers  to disperse, but  people  d o not believe, and  say it was done to prevent crowding.