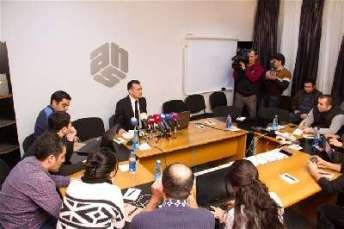 Azerbaijan is reviving censorship in the face of the National TV and Radio Council (NTRC), which stifles the TV channel ANS. The management of the channel intends to defend their rights in the courts up to the European Court of Human Rights. "It is a violation of freedom of speech and democracy," ANS Director Mirshahin Agayev said at a press conference on the evening of 22 January, commenting on the NTRC decision to ban the Hesabat (Report) program within a month for violations of the law.

Further, he actually accused NTRC of embezzlement, saying that 10 million manats allocated for shooting television series disappeared. ANS attempts to answer the question how the 10 million was spent caused the attacks on the channel, Agayev said.

He further noted that ANS will defend its rights by all legitimate means, and will submit a lawsuit against NTRC. "If the court decision is unjust, then we will appeal to the European Court of Human Rights," Agayev said, complaining of the unfairness of the courts in Azerbaijan. At the same time, he expressed hope that the political leadership of the country will support the channel. Agayev did not agree with the opinion that the decisions of NTRC are the will of the political leadership.

Always considered pro-government, ANS TV has been facing pressure from NTRC for several months. As a result of lawsuits, it has been imposed fines totaling more than 300 thousand manats. The basis for the fines was numerous violations of the law on advertising and other acts.

It is noteworthy that until now the channel has never claimed a violation of freedom of speech and democracy in Azerbaijan, claiming just the opposite, e.g. that the entire international criticism comes from the Armenian lobby and the enemies of Azerbaijan.