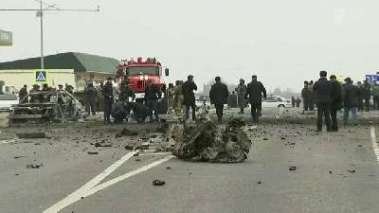 According to experts, the approximate power of the explosive device was 30 kg of TNT. The car was stuffed with a mixture of ammonium nitrate and aluminum powder. The scene is in the vicinity of the Azerbaijani-Russian border. According to unofficial information, the traffic on the road in the direction of Azerbaijan is  temporarily suspended.