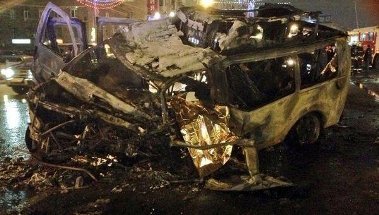 Two people inside the minivan were also killed, and five people including Mahachev’s wife and three children were injured in the accident, police said. Mahachev was at the wheel at the time according to police.

His body is to be taken to Dagestan on Friday for his funeral, Dagestani government sources have said. A probe into the accident has been launched, the Interior Ministry said.

Armored Vehicle Blown up in Dagestan, One Dead