Ilham Aliyev Concerned about Bad Attitude towards Migrants in Europe 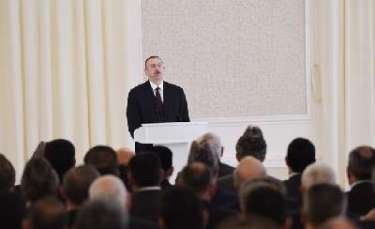 The West should learn from Azerbaijan's traditions of tolerance and multiculturalism. This is the opinion of Ilham Aliyev.

"The migration from the Middle East to Europe is the result of external intervention. To escape, the people flee their countries. Faced with grave threats, they go to Europe to save their lives. However, the attitude towards them does not conform to the principles enshrined by Europe. These people are in no way to blame. If in their countries there were no outside interference, they would live in their own countries," said Ilham Aliyev, speaking in Gandja on February 18.

According to him, the West shows "one-sided anti-propaganda" against migrants, while radical forces are intensified in Europe. If this continues, they will soon come to power. "What will happen in this case? How, then, will the interreligious relations be governed? Today, we can say the official position in all the European countries is, of course, positive. European governments, or some of them, are trying to show a decent attitude towards migrants. We see it and perceive it with approval. However, I want to repeat, if the opposition and propaganda on religious grounds continues, in the future we will face enormous challenges," he said.

"That is why I personally bring to the world community Azerbaijan's position on all these issues, and at the same time show their solutions on the example of Azerbaijan."