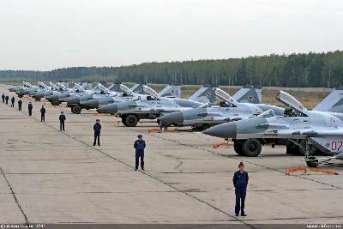 Yerevan / 20.02.16 / Turan- ArmInfo: The Russian aviation military base Erebuni in Armenia has been replenished by four renovated fourth generation MiG-29 fighters, one MiG-29C and a modernized transport helicopter Mi-8Mt.

As the press service of the Southern Military District of Russia reported, during the week the aviation equipment was delivered to the military airport in Yerevan from Krasnodar by military transport aircraft.

In the near future the front-line fighters and the helicopter will be assembled and put into operation. The pilots will begin flying the MiG-29 in mid-March of this year.

The air base in Armenia was formed in 1995. In November 1998, it received multipurpose fighter aircraft MiG-29. In July 2001, of the units located in Erebuni an air base was formed, which has become the air component of the 102nd Russian military base in Gyumri.

According to various sources, the military airport Erebuni has more than a dozen Russian MiG-29 based.

There are also planes of the Air Force of Armenia, most of which are Su-25.