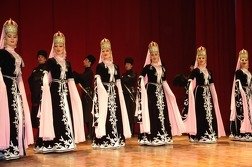 The International Circassian Association recognized the Kabardinka State Academic Ensemble of Kabardino-Balkaria as the national treasure of the Adyghe people, said a spokesman of the association Muhamed Khafitse in Nalchik, ITAR-TASS reports.

The national treasure status was initiated by the Adyghe Khase public organization.

The International Circassian Association was founded in 1991 and merges all regional offices of Adyghe Khase of Adygeya, Kabardino-Balkaria, Karachay-Cherkessia, Shapsugia, Moscow, Krasnodar, Turkey, Jordan, Syria, Israel, US, Netherlands, Germany. Abkhazians and Abazins are part of the association. The organization revives national culture, language, customs and traditions. Kabardinka won foreign and Russian contests. It will mark its 80th anniversary in November.