Russian woman wanted on suspicion of terrorism says she is in Egypt, where her husband takes treatment 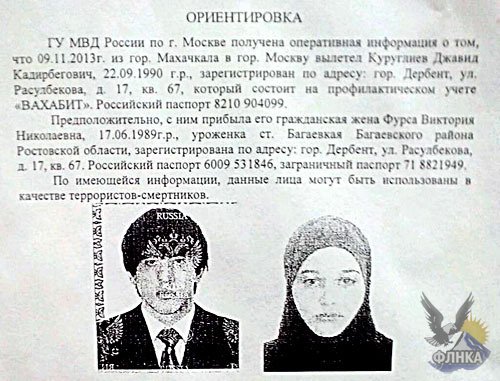 Victoria Fursa, a native of the Rostov Region, who was put on the federal wanted list together with her husband Javid Kurugliev, a native of Dagestan, as potential suicide bombers, are in Egypt, where Kurugliev is taking his treatment. Victoria herself told it to the "Caucasian Knot" correspondent.
The "Caucasian Knot" has reported with reference to the edition named "Arguments of the Week" that identification notices had appeared in Moscow and Voronezh, which read that according to the data of the Ministry of Internal Affairs (MIA), Javid Kurugliev and Victoria Fursa could become suicide bombers.

Victoria Fursa told the "Caucasian Knot" correspondent that the above data is false, and that she has been in Egypt with her husband since last November.

"On November 12, 2013, we quite easily passed all the checks and flew to Cairo. At that moment, same as ever before, we were not wanted. Both of us had no problems with the police ever before," Victoria told the "Caucasian knot" correspondent.

According to her story, she and her husband, together with relatives, intend to seek justice. Dmitry Fursa, Victoria's brother, said that he had already sent applications to the Russian Ombudsman, the Dagestani Regional Public Organization (DRPO) "Pravozaschita" (Advocacy), as well as to the Internet reception office of the Russian president.

Relatives of Kochubekov, killed in Makhachkala, point to inconsistencies in power agents' data