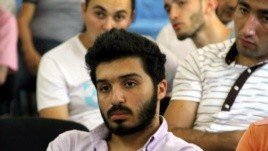 BAKU -- A young opposition activist and blogger in Azerbaijan has been given three-months' pretrial detention on drugs charges.

Omar Mammadov, 19, a co-founder of the Axin (The Current) youth movement and an active member of the Civic Solidarity Party (VHP), went missing on January 24.

The Axin movement announced over the weekend that Mammadov had been detained by police and charged with illegal drugs possession.

VHP spokesman Samir Asadli told RFE/RL on January 26 that Baku's Nasimi District Court had ruled that Mammadov must be kept in custody for three months while investigations are under way.

Mammadov faces up to three years in jail if found guilty. His friends and relatives say the case is politically motivated.

Mammadov is known for harshly criticizing and mocking Azerbaijani authorities in his blog posts.