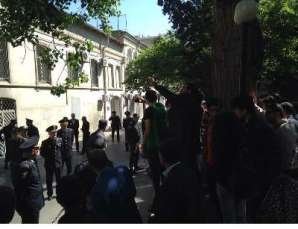 The Baku Court of Grave Crimes announced the verdict for the NIDA movement activists. The court sentenced Rashadat Akhundov, Zaur Gurbanly and Ilkin Rustamzadeh to 8 years' imprisonment, Rashad Hasanov and Mamed Azizov – to 7.5 years, Uzeyir Mammadov and Bakhtiyar Guliyev – to 7 years, and Shahin Novruzlu – to 6 years of imprisonment.

All of them were found guilty of organizing mass disturbances during the protest against soldiers' deaths in the army on March 10, 2013.

The court also found them guilty of illegal possession of explosives and drugs and disorderly conduct.

Recall that Amnesty International recognized all these activists " prisoners of conscience" .