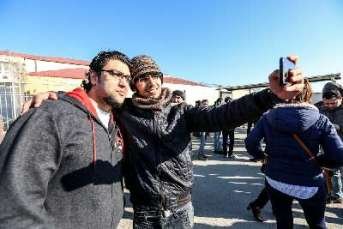 Activists  of NIDA Movement Zaur Gurbanli and Uzeyir Mammadov were released from prison on December 30 in the framework of the act of pardon issued by the Head of State.

After release, they went to the tomb of Ibrahim Novruz, a  grandfather  of Rashadat Akhundov who remained in custody, as well as the grave of  the father of Shahin  Novruz, another activist of  NIDA, freed earlier. Both parents died during the trial of their children and grandchildren.

Zaur Gurbanli and Uzeyir Mammadov were arrested in the spring of 2013 for taking part in the action against the soldiers' deaths,  and were sentenced to long terms of imprisonment. They were found guilty of organizing mass disorder, possession of narcotics and explosives.

Currently  there are  four of the eight convicted members of  NIDA remain in custody: Rashad Hasanov, Mohammed Azizov,  Rashadat Akhundov, and Ilkin Rustamzade.