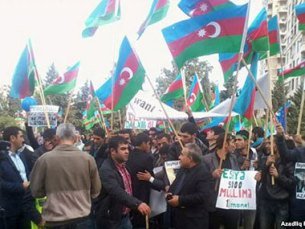 Thousands of Azerbaijanis took to the street on Sunday, calling for the resignation of President Ilham Aliyev, the release of political prisoners and an end to human rights abuses in the country, reads the article of Milana Knezevic published on Index on Censorship site.
On Saturday, investigative journalist Khadija Ismayilova was placed under a travel ban. She is currently facing criminal charges of libel and document forgery, which she denies and vows to fight. Last week, Index reported journalist Arzu Geybulla being threatened on social media and accused of treason after being interviewed by Azerbaijani news site Modern.az, the article reads.
In recent months in Azerbaijan many prominent human rights activists were arrested. The author notes the names of Leyla Yunus and her husband Arif Yunus, a human rights activist Rasul Jafarov, lawyer Intigam Aliyev, journalist Seymur Hezi.
As the article notes the European Parliament recently called on Azerbaijan — currently chairing the Council of Europe — to release several prominent political prisoners and proceed with reforming the country’s human rights policies. Before being arrested, Jafarov had worked on putting together a detailed list of the country’s political prisoners, with the latest figure coming to 98.