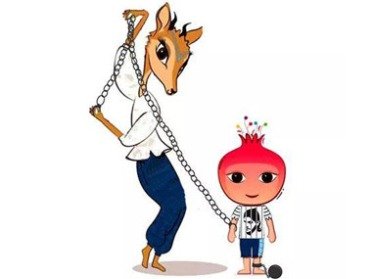 The social networks of Facebook have spread new variations of Baku EuroGames’s symbols, Nara and Jeiran, but this time they have distinct political subtext: Jeiran leads the chained Nara, dressed in striped T-shirts with pictures depicting 7 arrested members of the youth organization NIDA, reports the Azerbaijani information portal "Minval.az."
As noted in the article, the author of the pictures is unknown, but the fact that they have appeared on the network, have been distributed and are actively discussed, speaks of the mass civil protest on the eve of such a cultic event like EuroGames in Baku.
"Minval.az" notes that on May 6, 2014 eight of the activists of the youth movement NIDA faced the verdict: Rashad Hasanov (7.6 years), Zaur Gurbanov (8 years), Uzeyir Memmedli (7 years), Rashadat Akhundov (8 years), Ilkin Rustamzade (8 years), Bakhtiyar Guliyev (7 years), Mamed Azizov (7.6 years.
According to the portal, Shahin Novruzov, who was sentenced to a term of 6 years imprisonment was amnestied recently and was listed as pardoned by President Ilham Aliyev.
In 2015, the first European Olympic Games in the history will be held in Azerbaijan, and in 2016, Baku will host one of the Formula-1 races. According to the international human rights organizations, the authorities in Baku have tightened the repressions against the dissidents in order to prevent any unpleasant incident during the country's two major sporting events.