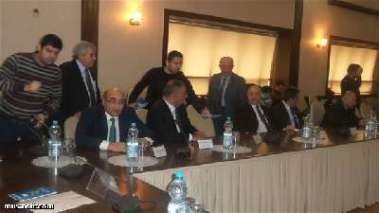 The Coordination Centre of the National Council at its meeting on Monday expressed its attitude to the event called "dialogue between the government and the opposition."

"It was not a dialogue, but an attempt to cover up the authoritarian and repressive nature of the regime," the statement said.

"What kind of dialogue can we talk about when the country has about 100 political prisoners, when in Parliament there is no opposition, when the government makes a priority of its policy for the destruction of democracy?

Therefore, the event is a show in order to simulate a dialogue. Title majority of the parties that participated in this show are not known to the general public.

The start of the so-called dialogue coincided with the new wave of repression and suppression of human rights, the nomination of new fraudulent charges against activists.

However, for some reason, all of these facts have not caused anxiety in participants of the "dialogue”, who, nevertheless, stated in favor of its continuation," the statement says.

Such a pointless meeting of those, who have no moral right to call themselves the opposition, with one of the state officials cannot be called a dialogue of the authorities and the opposition, according to the report.

Recall that the meeting on last Friday was initiated by Ali Hasanov. It was attended by representatives of several small parties, most of which take a pro-government stance.

Leading opposition forces in the face of PFPA and Musavat considered such a meeting senseless and refused to participate.