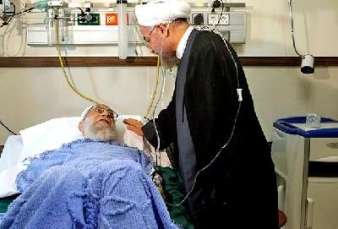 Foreign media reported  hospitalization of Ayatollah Ali Khamenei, Iran's Supreme Leader. The first information came from the  Israeli sources, and then from the West. Previously the  edition of Figaro, citing intelligence sources, reported that Khamenei "will live no longer than two years" because of advanced prostate cancer. In September 2014, he underwent surgery.

Ali Khamenei is 76 years, he has led Iran for 25 years. From 1981 to 1989 he served as the President. Now it has been officially stated bout the deterioration of his health.

Ayatollah himself assured compatriots that they should worry about his health, but asked to pray for him, and "preserve the unity of the nation."

In the media leaked information that Khamenei’s health is not well, and  in the hospital all government officials, including former President Mahmoud Ahmadinejad visited him.

It is unclear who will be the successor of Khamenei. The question about the new spiritual leader will be decided by the clergy, secular politicians and the IRGC.

The question who will lead Iran is very important for Azerbaijan for several reasons: due to the presence of 30 million Azerbaijanis in Iran, the big political and ideological influence of Tehran  in Azerbaijan.

The meeting of religious leaders of Iran and Turkey