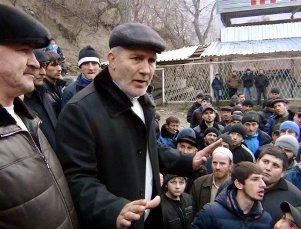 Today, ten residents of the village of Shushiya in the Novolak District of Dagestan have resumed their hunger strike with a demand to allocate land plots to them.

The "Caucasian Knot" has reported that on March 4 the hunger-strikers suspended their action, which was launched on February 10. Protesters demanded to return in the form of shares 9 hectares of land leased out by Agricultural Production Cooperative (APC) "Almaz".

As reported by Gusein Djakhbarov, the organizer of the protest, today, there are ten hunger-strikers – three men and seven women.

The action takes place in the same house as before.

"Our demands are the same – to allocate land for 104 households and pay compensation to four resettled families, who haven't received it yet. We suspended the action, because we hoped that our demands would be met. However, nothing has changed since. Even the decision of the Supreme Court of Dagestan about nine hectares, which was reported by the heads of the village and the district has not been posted on the Internet yet. All that we have are just talks," Gusein Djakhbarov told the "Caucasian Knot" correspondent.