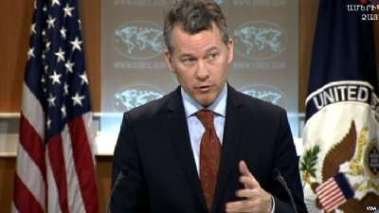 "The United States does not recognize Nagorno-Karabakh as an independent sovereign state, and will not accept the results of the elections held on May 3, as the effect on the legal status of Nagorno-Karabakh," stated at press briefing on May 1 Jeff Rathke , the US State Department’s spokesman.

According to APA, Rathke noted that "in the context of a comprehensive settlement of the conflict, the United States recognizes that the people of Nagorno-Karabakh will play a role in the decision of their future." However, these "elections in no way prejudge the final status of Karabakh or the outcome of the ongoing negotiations for a peaceful settlement of the conflict,"  he said.

The US Embassy of the decision of the State of Georgia