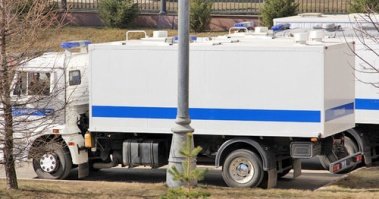 The Moscow City Court (MCC) has ruled to extend the arrest of Ilya Goryachev, the alleged organizer of the "Combat Organization of Russian Nationalists" (known as BORN), and transferred the preliminary hearing of his case to May 15.

Investigators believe that under Goryachev's leadership several murders had been committed, including the murder of Ilya Djaparidze, the leader of the "Antifa" movement; a Tajik citizen, who was a member of the group "Black Hawks"; and the lawyer Stanislav Markelov. Goryachev refuses to plead guilty. He is in custody, and the previous extension of his custody was till May 16.

The "Caucasian Knot" has reported that on April 17 the Russian General Prosecutor's Office (GPO) sent Goryachev's criminal case to the court. A preliminary hearing of the case, initially scheduled for April 28, was postponed by the MCC's decision till May 7, because of non-appearance of the participants of the trial.

Today, the MCC extended Goryachev's arrest until October 20 under the petition of the GPO. The decision was made behind closed doors.

The court has also rescheduled the preliminary hearing of Goryachev's case, because of the illness of his lawyer Nikolai Polozov, who, according to another lawyer Mark Feigin, is in hospital.

Let us remind you that on April 21 the Moscow Regional Court announced its verdict to four defendants in the BORN case.