Ukraine agrees to deployment of UN and EU peacekeepers 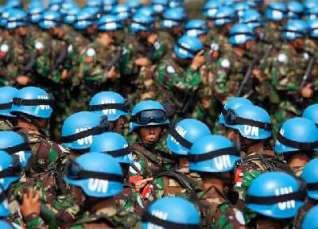 On Thursday the Verkhovna Rada adopted a law allowing deployment to its  territory foreign troops for a peacekeeping operation to ensure the speedy normalization of the situation in the Donetsk and Lugansk regions. The law specifies that the purpose of the stay of the armed forces of other states on the territory of Ukraine, is the providing  Ukraine military assistance at its request.

Deployment to the territory of Ukraine  the armed forces of states that have not recognized its independence and territorial integrity, or having territorial claims, and aggression against Ukraine is forbidden.

Speaking in parliament, President Poroshenko stressed that the likelihood of the resumption of large-scale war in the east of Ukraine is very real. He said that in the Donetsk and Lugansk regions there are 14 specialized battalions of Russia with total number of 14,000 people, and a huge amount of military equipment.

Kiev believes that the deterioration of the situation in Donetsk  is evidence of the beginning of the next offensive of the Russian troops to capture new territories of Ukraine, in particular Mariupol.