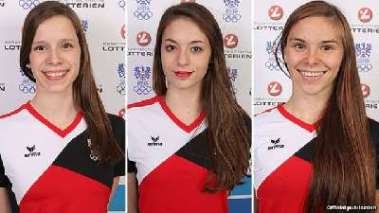 On Thursday, at around 8:30 pm local time three girls, members of the Austrian national team in synchronized swimming were seriously affected in the territory of the Village of Athletes in Baku. The girls walked down the sidewalk  and were hit by a bus. "We were shocked by the incident and immediately take all necessary urgent measures," said the general secretary of the Austrian Olympic Committee, Peter Mennel. According to him, Verena Breit received minor injuries, she had a bruised thigh of the right leg. Two other girls - Vanessa Shainovich and Moon Pazher have more serious injuries. The first girl have  multiple fractures, while the second hand injury. They both went to Vienna for further treatment. Two girls are accompanied by team doctor Robert Kandelhart, said the Olympic Committee Avstrii.

A BEGOC spokesperson: "BEGOC medical services responded to an incident this morning at the Transport Hub within the Athletes' Village in Baku which led to three Austrian athletes being immediately transported to hospital. BEGOC places the safety and welfare of all athletes as its number one priority. At this time we are unable to give further details but an update will follow later today."

According to unofficial information, as a result of the accident suffered four athletes. All of them are placed in intensive care, thehealth of one - is extremely hard.

Attempts to obtain official information and to find out the details are futile.

Residents of Chechnya state pressure on girls' families at marriage