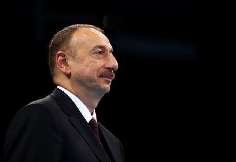 While the eyes of the world were focused on Turkey last weekend, Erdogan's doppelganger and ally Ilham Aliyev, president of oil-rich Azerbaijan, was watching his party sweep to victory in dubious parliamentary elections. Aliyev may have been grateful that the headlines were dominated by his country's powerful neighbour.

Earlier in 2015, Azerbaijan drew widespread international attention as it hosted the inaugural European Games in June. Unfortunately for the Azerbaijani government, this attention was hardly the positive PR exercise it had hoped. Despite the vast resources spent on what seemed intended as a vanity project, the world got a glimpse of the more sinister truth behind the smoke and mirrors. Aliyev was exposed as a jailer of journalists, human rights defenders and activists who had hoped the games would bring positive reforms, not further repression, to the country.

One thing was certain about the Azerbaijani elections: the chances of this vote being fair and free were eliminated long before election day. Despite the insistence of top Azerbaijani officials that the elections were conducted in a free, fair and transparent manner, reports flooded in of widespread fraud and irregularities, such as ballot stuffing and carousel voting.

Preliminary results awarded the majority of seats to the ruling Yeni Azerbaijan Party, with the second largest chunk being given to "independents", and the remainder scattered among small parties that tend to support the government. No true opposition voices were included.

Azerbaijan's top election monitor, Anar Mammadli, remains in jail after telling the truth about the last fraudulent election that awarded Aliyev a third term in office with nearly 85% of the vote. Ilgar Mammadov, leader of the Republican Alternative (Real) movement, is also still behind bars despite a judgment of the European Court of Human Rights ordering his release. Mammadov's party was the only "real" opposition group that did not withdraw its candidates from the race – although it has joined the call for cancellation of the election results.

Meanwhile, dozens of political prisoners are languishing behind bars in the country, including prominent investigative journalist Khadija Ismayilova, and human rights defenders Intigam Aliyev, Rasul Jafarov, and Leyla and Arif Yunus – the married activist couple who are both suffering from critical health conditions and should be immediately released on humanitarian grounds alone.

Rasim Aliyev, a journalist and chairman of the Institute for Reporters' Freedom and Safety (IRFS), was severely beaten on 8 August and died in hospital the following day. Although his attackers seemed to be connected to a football player Aliyev had criticised on Facebook, he had reported receiving threats prior to, and unrelated to, the incident with the footballer yet police failed to provide him with protection.

Significantly, for the first time these elections took place with almost no credible international observation. The OSCE Office for Democratic Institutions and Human Rights, the OSCE Parliamentary Assembly, and the European Parliament all cancelledtheir monitoring missions.

The Parliamentary Assembly of the Council of Europe (Pace), however, ignored calls from human rights groups to do the same, and sent 28 observers to monitor the elections – inadequate even in the best of circumstances, but more so considering Pace's problematic involvement in the last election in Azerbaijan.

As predicted by human rights groups, Pace's preliminary statement of findings failed to reflect the harsh reality on the ground. Although the statement noted "with regret that serious concerns in the sphere of human rights still remain in Azerbaijan", the delegation still insisted the elections represented democratic progress.

It concluded: "The significant increase in voter turnout and the transparency of voting and counting procedures demonstrate another step forward taken by the Republic of Azerbaijan towards free, fair and democratic elections and that the results of this vote express the will of the Azerbaijani people."

Intentional or not, this statement comes across as endorsement of an illegitimate vote, and is already being widely portrayed in Azerbaijan's pro-government media as such. Notably, however, for the first time a dissenting opinion was published by three members of the Pace delegation, who expressed "regret that we cannot regard these elections as a step towards free, fair and democratic elections... the situation in the country with respect to political freedoms, freedom of expression and media, and freedom of assembly and association does not provide conditions for holding free and democratic elections".

But sadly, these three lone voices are not enough. It is time for Pace – as well as the Council of Europe as a whole and indeed the international community more broadly – to take a stronger and more consistent approach in working to hold Azerbaijan accountable for its human rights obligations.

There is an urgent need for concrete support to the few courageous individuals still fighting against the odds to make their voices heard, and not just from Western politicians, but from everyone – companies, celebrities, even sporting officials – who has relations with Azerbaijan. Business simply cannot continue as usual with the increasingly repressive Aliyev regime.

But with the country already gearing up to host the 2016 Formula One European Grand Prix – and F1 chief Bernie Ecclestone already dismissing human rights concerns – that hardly seems likely.

Rebecca Vincent is the Coordinator of the Sport for Rights campaign, a coalition of international organisations working to draw attention to the human rights crackdown in Azerbaijan. The issues highlighted in this piece are further detailed in Sport for Rights' new report, No holds barred: Azerbaijan's human rights crackdown in Aliyev's third term.