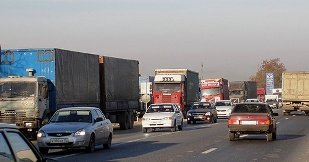 The situation in Dagestan is being exacerbated because of the social, economic and religious conflicts. This was announced by participants of a roundtable held in Moscow. The introduction of additional tolls for the use of federal highways has struck truckers of Dagestan; the conflict over the change of the Imams of the Salafi mosques threatens with radicalization of young people; and the ideological struggle against the "Islamic State" (IS) is not convincing enough. This opinion was expressed by experts, who visited Dagestan.

Irina Gordienko, who has recently returned from Dagestan, has described the strike of truck drivers. According to her, the problem of the introduction of the additional tolls for each kilometre on federal highways can result in the future growth of prices, unemployment, and social tension.

Let us remind you that in Dagestan, starting from November 15, truckers are on strike within the framework of the All-Russian protest action, by parking their heavy-duty trucks on the highway shoulders. The strike venues are Khasavyurt, Kizlyar, Kayakent and the village of Manas of the Karabudakhkent District. Truck drivers are protesting against the introduction of heavy truck tolls for the use of roads of federal significance.

According to the participants of the roundtable, another acute problem faced by Dagestan is the conflict over the Salafi mosque in Makhachkala, which can seriously destabilize the situation in the republic.

On November 20, the conflict occurred over the Salafi mosque located in Kotrov Street. On that day, according to believers, representatives of the Dagestani Spiritual Administration of Muslims (SAM) dismissed the legitimately elected Imam and appointed their Imam. A fight occurred at the mosque. Some believers were brought to the police station.

This is not the first Salafi mosque subjected to pressure. At present, the mosque in Leninkent is under pressure, and the airport mosque in Derbent and the mosque in Novy Kurush are closed. This was noted by Ekaterina Sokiryanskaya, Project Director for Northern Caucasus of the International Crisis Group.

Meanwhile, Ekaterina Sokiryanskaya has emphasized that in Dagestan, many people agree that the violent change of the Imam in the mosque in Kotrov Street was a local initiative. "According to one version, this is an initiative of the Dagestani Spiritual Administration of Muslims (SAM), which has long wanted to build the mosque into its system. Another version treats it as an initiative of the Ministry of Internal Affairs (MIA), which leaders have made such a move for career reasons, to strengthen their positions," she has said.

"We are unlikely to learn all the truth concerning who has initiated the change of the Imam at the mosque in Kotrov Street. However, one thing is clear: it is quite unbeneficial for the federal centre and law enforcers. Such actions will create a wave of tension and a new hotbed of discontent," Ekaterina Sokiryanskaya has noted.