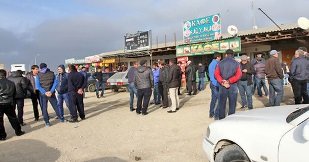 Truck drivers, who took part in the strike against the system "Platon" in Dagestan, went home. According to the truck drivers, they are ready to resume their protest action in early 2016.

The "Caucasian Knot" has reported that truckers from several regions of Russia, including the Krasnodar Territory, Dagestan, the Volgograd and Rostov Regions, are protesting against the introduction of the "Platon" system aimed at collecting tolls from trucks for using federal highways.

"In the evening of December 21, all the truckers went home. However, we constantly phone each other, and we are waiting for news from Moscow, from our guys who are there. We also keep contact with the truckers from other regions. We should to think over what to do further," Magomed R. has stated.

Another truck driver has noted that according to the preliminary information, the trucker drivers from Dagestan are planning to resume their protest action after December 31. However, according to him, "the date has not been defined yet."

"During the past two weeks, the strike throughout Russia began to decline. And yesterday (on December 21), the last protestors went home. We naively thought that we would be noticed and the government would pay attention to the problem faced by carriers. No trucker can benefit from work at a loss. And while large transportation companies can cope with all their losses, then small carriers will simply go bankrupt, let alone private entrepreneurs, who represent the majority of businessmen in Dagestan," Abdurashid G. has expressed his opinion.