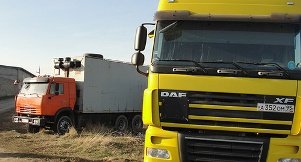 Today, in Dagestan, truck drivers from different regions of the country have gathered in Manaskent to discuss measures to protect their rights. The participants of the meeting in Manaskent have stated they will not cease their protest actions against the toll system "Platon".

The "Caucasian Knot" has reported that truckers from several regions of Russia, including the Krasnodar Territory, Dagestan, the Volgograd and Rostov Regions,are protesting against the introduction of the "Platon" system aimed at collecting tolls from trucks for using federal highways.

In total, according to the organizers, the truck drivers' meeting in Manaskent was attended by 150 drivers. In the course of the event, it has been reported that the initiative group of truck drivers "is travelling to the regions to see how many people are willing to come together," the "Caucasian Knot" correspondent informs.

Such meetings have already been held in the cities of Murmansk, Pyatigorsk, Petrozavodsk, and Ryazan. It is expected that similar meeting will be held in Rostov-on-Don.

"Our problem is that we do not come together. If we are on protest, then all of us should stop this thankless job and strike together. Why should we pay for travelling on bad roads?" Alik Isinbaev, the chairman of the meeting, has noted during the event.

"We have set for ourselves: the system 'Platon' is unfair to drivers. This system destroys the real sector of the economy," said Vitaly Voitko, the coordinator of the association "Trucker".