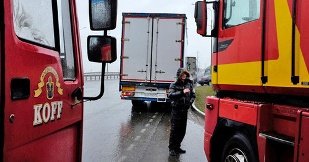 The introduction of the "Platon" system has launched a serious strike to small businesses in the field of transportation. The tariffs of the new system toll and of the transport tax should be revised. The speech of Prime Minister Dmitry Medvedev gives hope for the possible search for a compromise solution. This opinion has been expressed by experts interviewed by the "Caucasian Knot".

The "Caucasian Knot" has reported that truckers from several regions of Russia, including the Krasnodar Territory, Dagestan, the Volgograd and Rostov Regions, are protesting against the introduction of the "Platon" system aimed at collecting tolls from trucks for using federal highways. Earlier, the strikers announced their intention to transfer protests from their regions to Moscow, and most of them are now in Moscow suburbs.

In his speech, Dmitry Medvedev has emphasized that the developed countries, including Germany, have also introduced the road tolls similar to the "Platon" system. When commenting on Dmitry Medvedev's statement, economist Mikhail Chernyshov, Senior Researcher at the Institute of Market Problems of the Russian Academy of Sciences (RAS), has noted that it is not correct to compare the roads of such developed countries as Germany and the roads of Russia.

"Firstly, the road network in, for example, Germany is much more developed than in Russia, where there are practically no roads, we can say. Secondly, the condition of the roads is completely different. And the question is what for should truckers pay?" Mikhail Chernyshov told the "Caucasian Knot" correspondent.

The Dmitry Medvedev's statement concerning the "Platon" system may mark the beginning of some changes. This opinion has been expressed by Natalya Zubarevich, Director of the regional programme of the Independent Institute of Social Policy.

"At present, the policy of compromise is being implemented. We see that the fines have been reduced and the introduction of full payment for mileage has been delayed," Natalya Zubarevich told the "Caucasian Knot" correspondent.