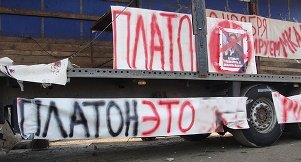 One of the protesters has informed the "Caucasian Knot" correspondent that drivers of 50 heavy-duty vehicles continue their protest near Khasavyurt: "Most of them went to hold protest in Moscow. There are at least 200 trucks from Dagestan there; and we continue standing and waiting here."

The "Caucasian Knot" has reported that truckers from several regions of Russia, including from the Krasnodar Territory, Dagestan, and Volgograd and Rostov Regions are protesting against the introduction of the "Platon" system that provides for collection of tolls from truck owners and drivers for using federal highways. The strikers announced their intention to launch protests in Moscow; and some of them are now in the suburbs of the Russian capital.

According to the driver from Khasavyurt, the moods among the protesters "are not very optimistic." "Nobody has any interest in us; even the police have ceased to frighten us," said the driver, reminding that earlier, policemen used to come home to many truckers to ask where they were and to warn "about responsibility for taking part in unauthorized protests."

A trucker named Magomed, who is striking near Khasavyurt, is afraid of politicization of truckers' protests. "We don't want politicians to benefit from our troubles. If they really want to help us, let them raise the issue, at the level of State Duma, of abolishing the tolls as illegal; but they shouldn't promote themselves in this way," he said.

According to the driver, the regional authorities are also "ignoring the problem." "I understand that the cancellation of the fee is beyond their competence. But Dagestani authorities could stand up for the truckers, as in our republic this business provides jobs for almost 30% of men," said Magomed.