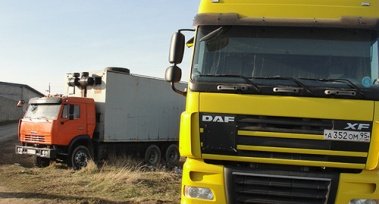 About seventy drivers of heavy-duty vehicles took part in the meeting, which elected the heads of district branches of the Independent Trade Union of Entrepreneurs and Drivers of Dagestan. After the meeting, six drivers were detained by the police.

"We were taken to the local GOVD (City Division of Internal Affairs), where they asked me to write an explanatory note: why and on what basis people had gathered. I said that people's desire to gather is a sufficient basis. They did not explain anything, they just said, 'Let's treat it kindly.' It was like a provocation," said Isalmagomed Nabiev, the organizer of the meeting and the head of the Independent Trade Union of Entrepreneurs and Drivers.

According to truckers, about seventy of them took part in the meeting; and six of them, elected into the governing body of the union were detained, the "Chernovik" reports.

Truckers from regions of Russia, including Krasnodar Territory, Dagestan, Volgograd and Rostov Regions, stood against the introduction of the "Platon" system of charging trucks for driving on federal significance highways. On December 9, 2015, drivers decided to create an all-Russian Association. Dagestan has become one of the most active regions in the campaign against the "Platon" system. At the end of December 2015, local truckers decided to temporarily curtail their protests.

The "Caucasian Knot" has reported that earlier Dagestan truckers were summoned to the police, were they were checked for extremism; it happened after they decided to set up the Association of Heavy-Duty Truck Drivers in the republic.