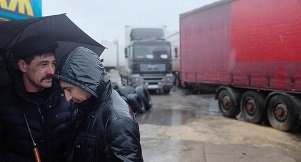 Drivers of heavy-duty trucks are ready to go to work, but they will not stop speaking out against the "Platon" system, said Alexander Kotov, the head of the union of professional drivers. The faction of the Communist Party of the Russian Federation (CPRF) in the State Duma intends to challenge the introduction of the "Platon" system at the Russia's Constitutional Court (CC), said Vladimir Rodin, an MP.

Alexander Kotov, Chairman of the Central Council of the Inter-Regional Trade Union of Professional Drivers, said in his comment to the "Caucasian Knot" that truckers' protests in Northern Caucasus are on decline, although not stopped.

He noted that after truckers' hopes for the State Duma and president had failed, they are waiting for the CC's decision.

In South Russian, truckers' protests continue only in Dagestan. According to strikers themselves, by December 17, some 50-60 people and 70 heavy trucks were still near Khasavyurt.