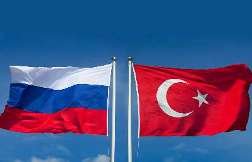 In his latest state-of-the-nation speech this week Russian president Vladimir Putin outlined his country’s regional ambitions in the short term and sent a clear messages to the neighbors: Ukraine is no longer at the center of Moscow’s attention; Syria and Turkey are.

In an interview with TURAN’s correspondent he said, in fact, the level of rhetoric from Moscow is surprising in its bellicosity, which has a negative effect on allowing other sides in the region to move past the incident.

Who's side should Azerbaijan take in this regional confrontation? The analyst says, ‘this is a tough one.’

‘If I were advising the powers that be in Baku, I would tell them to avoid getting involved – empty platitudes all around. Yes, Turkey is a natural friend and ethnic kin to the Azerbaijani, but Moscow’s ability to make life worse for Azerbaijan is greater than Ankara’s.’

Russia, he said, has an interest in preserving its ally Assad, both because of its bases in Syria and to better secure its alliance with Iran. ‘Trying to position itself as the main opponent of ISIS is also ‘good public relations and also (now) a domestic political reality, given the destruction of the Russian plane in Egypt.’

Turkey, however, wants to get rid of Assad but more importantly, sees the Kurds as a far greater threat than ISIS. Thus, tensions are going to increase as Russian bomb anti-Assad rebels (including Turkmen, Turkey’s ethnic kin) and Turkey is seen as undermining the fight against ISIS through passive support by not attacking them or, as Moscow argues, by indirectly bankrolling them.

The only possible way out of current Russia-Turkey tension is, as analyst puts it, ‘an Assad later policy,’ which would consist of tabling the issue of post-civil war Syria and ‘fight ISIS together,’ he said.