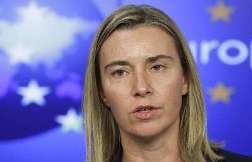 Release of the human rights activist Leyla Yunus and her husband, a political scientist Arif Yunusov from prison is a positive step, but after that other political prisoners should be also released. This is the main message of the statements of representatives of international organizations at the decision of the Court of Appeal to replace the prison sentence by conditional on the spouses Yunus.

As spokeswoman for Mogherini Maja Kocijancic said, «it was a long desired positive humanitarian gesture."

In her statement she also expressed hope for continuation of such steps in the future and the willingness of the EU to deepen and broaden relations with Azerbaijan.

The release of Yunus was also welcomed by the head of the European Parliament Martin Schulz.

"The release of Leyla Yunus on the eve of International Human Rights Day is great news for the human rights in Azerbaijan and around the world. But I want to note that Leyla and her husband Arif Yunus were released only conditionally. The European Parliament reiterates its request to remove their sentences and justify them," stated Schulz.

He called on the Azerbaijani authorities to "continue this way, and show goodwill and release the other "prisoners of conscience".

Secretary General of the Council of Europe Thorbjorn Jagland on December 9 made a statement in which he welcomed the release of Yunus.

"After the release of Leyla Yunus from prison I felt better. I hope that now she can begin to rebuild her health. Today, our thoughts are also with other human rights activists arrested in Azerbaijan," Jagland said in the statement.

In his opinion, "in Azerbaijan other prisoners should be also released before they get seriously ill."

"The release of Leyla Yunus is a positive humanitarian gesture. ODIHR stands ready to continue effective discussion on human rights issues with the government of Azerbaijan," in turn, said the Director of Office for Democratic Institutions and Human Rights (ODIHR), Michael Georg Link.

The release of Yunus was also welcomed by the PACE President Anne Brasseur, German Foreign Minister Frank-Walter Steinmeier, head of the Helsinki Commission of the US Congress Christopher Smith, et al.

The spouses Leyla and Arif Yunus were arrested in the summer of 2014 and a year later convicted of economic crimes, respectively, to 8.5 and 7 years in prison. On December 9 the Appeal Court changed the real imprisonment terms by a conditional prison sentence.

Germany and the EU are pleased to release Leyla Yunus