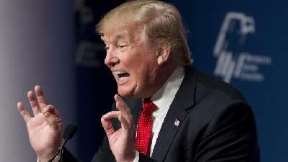 Donald Trump’s proposal to bar all Muslims from entering the United States violates U.S. and international law and would never be allowed by the courts, legal scholars said late Monday.

"Oh, for the love of God,” said Jonathan Turley, a constitutional law expert at George Washington University. "This would not only violate international law, but do so by embracing open discrimination against one religion. It would make the United States a virtual pariah among nations.’’

The GOP presidential candidate on Monday called for a "total and complete shutdown” of Muslims entering the United States, including immigrants, tourists and even Muslims who are U.S. citizens and travel abroad. His plan to bar U.S. citizens drew particular ire from legal experts, some of whom fumbled for words as they tried to explain its illegality, since none had considered the matter before.

"That’s blatantly unconstitutional if it excludes U.S. citizens because they are Muslims. It’s ridiculous,” said Richard Friedman, a law professor at the University of Michigan. He cited the U.S. Constitution’s equal protection clause and the First Amendment’s doctrine of freedom of religion.

Barring Muslims who are not U.S. citizens from entering the country may not violate U.S. law in the same way, the experts said, because the Constitution’s protections generally do not apply to people outside the nation’s borders. But that’s irrelevant, they said, because Trump’s plan would break many principles of international law and agreements the U.S. has signed with other nations.

"We have treaties, all sorts of relationships with other countries,’’ said Palma Yanni, a D.C. immigration lawyer and past president of the American Immigration Lawyers Association. "I’m sure it would violate innumerable treaties if we suddenly started banning citizens of NATO countries, of Southeast Asian countries.’’

The closest parallel in American history to what Trump is proposing appears to be the Chinese Exclusion Act of 1882, which "effectively halted Chinese immigration for ten years,’’ according to a Harvard University Library Open Collections Program called Immigration to the United States, 1789-1930.

The first major anti-immigration statute, it was not fully overturned until Congress passed a new immigration law in 1965, and it was never ruled on by the Supreme Court.

But the experts said that Trump’s proposal would go much further because it targets religion, not a nationality or region. "A nation could argue that national security provides a rationale for barring immigrants from particular countries engaged in civil wars,” Turley said. "But those rationales fall by the wayside when you are using an arbitrary criteria like religion.”

Beyond the legal problems, Trump’s plan would also likely be doomed by practical factors, such as the difficulty and intrusiveness of questioning potential immigrants based on factors such as their surname. And religion "is not on any passport that I’ve ever seen,’’ said Yanni, who labeled the plan "impossible.”