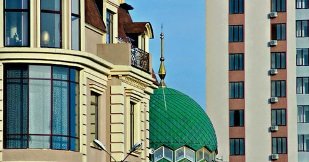 By their condemning of the "Islamic State" (IS), the leaders of the Juma Mosque, located in Hungarian Fighters Street in Makhachkala, made an efficient step in the efforts to protect the Muslim youth, said the experts interviewed by the "Caucasian Knot". In the opinion of mosque-goers, not the condemnation as such, but the justification of this position is important.

Earlier in that mosque the well-known Salafi preacher Nadir Abu Khalid worked. After in May this year, he sworn to the IS, recognized a terrorist organization and banned in Russia, the leaders of the mosque were ordered to close it.

The above condemning statement was announced during the Friday namaz on December 18, said one of the parishioners.

According to Ekaterina Sokiryanskaya, Director of the North-Caucasian Project of the International Crisis Group (ICC), it is clear that the statement was made in the context of the conflict around the mosque in the Kotrov Street of Makhachkala and pressure exerted on other Salafi mosque in the republic. One of the main claims of the authorities and the Spiritual Administration of Muslims (SAM) against the Kotrov mosque was the lack of a clear position with regard to the IS, she explained.

Sokiryanskaya has noted the importance of the fact that the above statement clearly justified the position of the mosque with reference to the opinions of authoritative Muslim scholars.

She believes that the Salafi community in Dagestan is now weak; it has few leaders ready to take responsibility for the youth and stick to a clear position, without fear of criticism from their supporters.