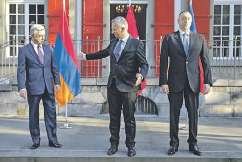 Brief information on the results of the meeting of the presidents of Azerbaijan and Armenia on December 19 in Bern suggests that the main topic of conversation between Ilham Aliyev and Serzh Sargsyan was another statement of commitment to the peaceful settlement of the Karabakh conflict.

The leaked information that after the talks both presidents raised their glasses for peace in the region means that the parties  have  given certain guarantees to countries- co-chairs in the OSCE Minsk Group in the face of the United States, Russia and France to reduce the escalation in the zone of contact between the opposing forces and the maintenance of peace talks.

Indirect confirmation  is the fact that the problem of the maintenance of peace was the main  at the meeting, there was a statement that the presidents discussed the proposals put forward by Russian Foreign Minister, Sergei Lavrov. Briefly was reported Lavrov’s proposal to  continue  a comprehensive settlement, which began at the summits in Sochi, Wales and Paris in 2014, and intensify dialogue in 2016 on the basis of proposals that are currently under discussion. This point is noted in the joint statement of the foreign ministers of Minsk   Troika on 3 December this y

ear. This means that the meeting was the result not  of the initiative of Russia, but the whole of the Minsk Group, concerned about the escalation of violence.

Usually in such cases the traditional Troika  joined  Russia as a firefighter  of  the  passionate  heads of the South Caucasus. For example, numerous meetings with  participation  of the Russian President Vladimir Putin and Dmitry Medvedev took place precisely during periods of special military surge. It did not  cause the  reject of  using force by the parties, but localized within the permitted military clashes on the Karabakh front.

The absence of any other evidence on an-hour official meeting, including initiatives shows that the mediators are not ready for real negotiations, largely due to the current international issues such as the fight against terrorism from Damascus to Paris. This means that the upcoming 2016 year, although they  promise, may not be used for a breakthrough in the Karabakh issue, as on the agenda are much more global challenges, requiring the consolidation of efforts of the European and Middle Eastern countries to eliminate the main sources of terrorism and pacifying crises in post-dictatorship  countries of the Arab  world.