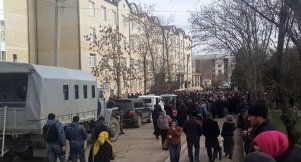 The "Roszdravnadzor" (Federal Service for Surveillance in Healthcare) has started checking the perinatal centre in Khasavyurt, where Zalina Dalieva, a maternity patient of Chechen origin died. The perinatal centre itself is operating normally, the "Caucasian Knot" was informed on February 5 by Zarina Agmadova, the press secretary of the Dagestani Ministry of Public Health.

The "Caucasian Knot" has reported that on February 3, in Khasavyurt, relatives of Zalina Dalieva, a local woman, who died on January 29 after a surgery, came to the building of the perinatal centre. People claimed that the woman's death was caused by doctors' fault. According to a woman participating in the protest action, about 1300 people gathered near the perinatal centre. Later, the Ministry of Public Health of Dagestan announced that they had started an investigation into the death of Zalina Dalieva.

A female relative of Zalina Dalieva told the "Caucasian Knot" correspondent that after the protest action, the perinatal centre does not accept pregnant women of Chechen origin.

"We have learned that the perinatal centre stopped accepting Chechen women. They say: "Go to your Chechnya to give birth to your children.' But why should we go somewhere? We live in Khasavyurt. Dagestan is our republic, we live here, and they are to accept all local residents at the centre. If they continue following the policy, it will likely result in very serious consequences," the woman has stated.

Meanwhile, on behalf of Veronika Skvortsova, Russian Minister of Public Health, the territorial body of the "Roszdravnadzor" for the Republic of Dagestan has started checking the perinatal centre in Khasavyurt, where the 34-year-old maternity patient died, reports the "Roszdravnadzor" website.