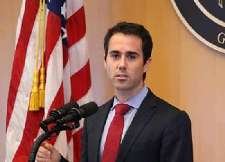 The United States welcomes Deputy Minister Azimov to the OSCE Permanent Council. Your appearance here today signals Azerbaijan’s interest in contributing to the Organization’s comprehensive approach to security, and to upholding our common principles and commitments.

At the outset, let me underscore that the United States believes efforts in support of resolving the protracted conflicts within the OSCE region should remain high on this Organization’s agenda. As a co-chair of the OSCE Minsk Group, the United States will continue to work closely with the sides to achieve a lasting, negotiated settlement of the Nagorno-Karabakh conflict based on the principles of international law, the UN Charter, and the Helsinki Final Act.

Deputy Minister Asimov, I take note of your comments, and regret some of your comments about my colleague, Ambassador Jim Warlick and I can only say to you, in order to follow up on your quotes from Twitter, I was reading Jim’s twitter feed, and in one recent tweet he reaffirmed, "The @OSCE Minsk Group is not satisfied with the status quo, we are fully committed to negotiations for a peaceful settlement.” And so in that respect I can only assure you that in private with me, as well as in his public statements, Ambassador Warlick has made clear that he shares this position.

Regretfully, violence along the line of contact and the Armenia-Azerbaijan state border has escalated over the past several months. The United States reiterates the concerns of the Minsk Group Co-Chairs and condemns the use of mortars and other heavy weaponry that has caused civilian casualties. We echo the Co-Chairs’ appeals to the sides to take immediate steps to reduce tensions and protect lives. The status quo is neither acceptable nor sustainable, and we remind the sides that there can be no military solution to the conflict. The United States strongly supports the Co-Chairs’ efforts to facilitate an intensified dialogue between the Presidents of Armenia and Azerbaijan and to establish structured negotiations in order to make progress towards a peaceful settlement.

Deputy Minister Azimov, the United States and Azerbaijan enjoy broad bilateral relations. The United States wants to help Azerbaijan succeed as a democratic, prosperous, secure, and sovereign country. We have developed fruitful and substantial cooperation in a number of fields, including energy, security, and commercial matters. Azerbaijan has achieved significant advances in education, combatting human trafficking, and women’s rights. Azerbaijan has also made important contributions to international peacekeeping, counterterrorism, and energy security and diversification.

Given our broad relationship, we urge the government to respect and uphold the human rights and fundamental freedoms of all its citizens, consistent with its international commitments and obligations. This is not separate from, but indeed a central component of, achieving a comprehensive and sustainable security for Azerbaijan and the region.

The OSCE provides valuable support to all participating States in adhering to their human rights and other commitments, such as those related to combatting terrorism and extremism, promoting good governance and fighting corruption, and advancing democratization and the rule of law. We encourage the government of Azerbaijan to take advantage of the valuable resources provided by the OSCE by deepening cooperation with the Organization and all of its institutions.

The United States seeks to modernize the Vienna Document, the importance of which has been made even clearer by the crisis in and around Ukraine and the broader European security environment. We invite all participating States, including Azerbaijan, to engage in substantively updating the Vienna Document by the time it is reissued at the end of 2016. It is time to move beyond a general discussion of the shortcomings of the Vienna Document, and demonstrate our commitment to increased transparency through concrete proposals to modernize this important collection of confidence- and security-building measures.

Deputy Minister Azimov, as we turn our sights towards the future, the United States looks forward to working with Azerbaijan in new fields. Azerbaijan can play an important role in improving economic connectivity in the Caucasus, Central Asia, and beyond, and can make a substantial contribution to dialogue on this topic within the OSCE.

Parenthetically, I should note that the United States regrets the closure of the OSCE Office in Baku and hope that it is temporary because such a presence could contribute to this work, along with the work in other dimensions including the rule of law, human rights and countering transnational threats.

The United States supports Azerbaijan’s efforts to develop regional transportation services and other infrastructure as part of the New Silk Road. We commend reforms undertaken regarding customs procedures and transit cargo processing, and are actively working with our Azerbaijani counterparts to facilitate further improvements in this sector. The United States also applauds steps taken by Azerbaijan to diversify its economy and facilitate economic growth. Recent reforms in policy and the regulatory environment in Azerbaijan are enhancing competitiveness, encouraging investment, enabling the growth of small and medium businesses, and strengthening dialogue with the private sector. We encourage Azerbaijan to take advantage of the platform provided by the OSCE to enhance regional cooperation and economic connectivity.

In closing, Deputy Minister Azimov, let me assure you that the United States remains committed to working with the government and people of Azerbaijan, both bilaterally and within the OSCE, in support of their efforts to ensure a democratic, strong, stable, and prosperous future.