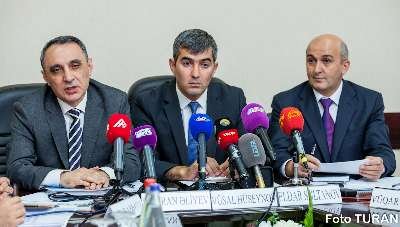 In the first half of the year the Commission to Combat Corruption, under the General Prosecutor’s Office, investigated 166 criminal cases, and lawsuits have been filed on 78% of them, said the head of the commission, Kamran Aliyev, at a press conference today.

According to him, in the first half of the year 100 criminal cases, against 200 persons, were completed and submitted to the courts. One person prosecuted for bribery, 25 for taking bribes, 12 for abuse of office, one for abuse of power, 4 for negligence, 73 for misappropriation and embezzlement and 79 for fraud.

The Courts awarded compensation of 7961 million manat on total damages of 16 million 460 thousand manat. Secretary of the Commission Against Corruption, Vusal Huseynov, believes that the opening of ASAN centres helps to fight against corruption.

The head of the Research Fund "Constitution," Alimammad Nureyev, noted that among the corruption cases, there are no investigations regarding money laundering and other serious crimes related to high-ranking officials. As before, there is corruption in the banking systems.

The head of the organization "Transparency Azerbaijan", Rena Safaraliyeva, noted the need to investigate corruption in the registration of ownership, public service and public procurement. Most complaints come on these areas.

Civil society activist, Sevgim Rakhmanov, pointed out the problems with the reception of citizens by officials. Thus, citizens are not allowed even close to the district administrations.

Aliyev, head of the Anti-Corruption Office, responding to questions, said that complaints of corruption of judges have been reported, but complaints about the bailiffs have been investigated.

As for materials of foreign media about corruption in Azerbaijan, "very often what is written is political propaganda," said Aliyev.

Responding to the question on disapproval of the declaration of income by officials, Secretary of the Commission Against Corruption, Huseynov "reassured" that the draft document is ready, and is being discussed with experts from civil society and international organizations, but he did not answer the question, regarding when the drafts will be approved.

In 2005, due to the adoption of the law on corruption, the Cabinet of Ministers was proscribed to approve the declaration forms of income during a year.

Several more Dagestani functionaries to be punished for corruption

Head of Kayakent District of Dagestan is accused of frauds with flats for orphans worth 1.5 million roubles