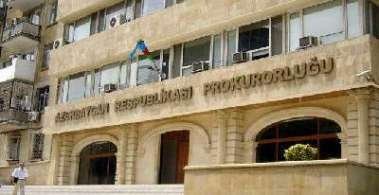 Prosecutor General's Office continues the investigation of the criminal case in connection with the events of January 1990. Thus, the head of the press service of the Prosecutor General Office,  Eldar Sultanov,  in response to a request of Turan, said that the initial investigation was conducted  by the Prosecutor General of the USSR. Then the investigation concluded that there was not a crime in the actions of the military, and the case was dismissed on 20 December 1990. In turn, the Prosecutor General's Office  of Azerbaijan filed a lawsuit  on February 14, 1992 under several Articles of the Criminal Code: 94 paragraphs 4 and 6 (premeditated murder with aggravating), 149 (intentional destruction of or damage to property), 168 (abuse of power and authority), 255 (abuse and abuse of authority.) The investigation revealed that during the occupation of Baku 132 people were killed, 612 were injured, and 841 were illegally arrested, hundreds of buildings were damaged,  and citizens were harmed. In 1994 it was decided to bring to justice  the then first secretary of the Communist Party of Azerbaijan Abdurahman Vezirov and others. They escaped, and currently are wanted.

A lawsuit against the President of the Supreme Council Elmira Kafarova and second secretary of the Communist Party of Victor Polyanichko were discontinued because of their death. All 68 volumes of the lawsuit, initiated by the Attorney General of the USSR, were sent to Moscow. To return materials inquiries were sent to Azerbaijan, to law enforcement agencies of Russia, were sent documents to capture and transfer the accused persons to the investigation. However, so far there was not positive respond to these requests,  reads the response of the Prosecutor General of Azerbaijan. The response does not publish  the names of persons whom the Prosecutor's Office of Azerbaijan is looking for 25 years, and it is not clear what they are accused of.