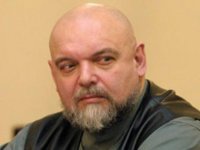 There is an implicit conflict between Turkey and Azerbaijan, conditioned also by the Kurdish factor, said the chairman of the Islamic Committee of Russia Heydar Jemal in an interview to "Society for the Scientific Study of Caucasus."

According to him, Turkey sees Kurdish mafia in Ilham’s clan, the Kurdish ethnocracy "which under the guise of Turkish discourse in fact controls over the situation which casts unpleasant reflections over the Kurdish situation in Turkey."

He noted that "all play against each other and use any leverage that they have."

"Iran uses Shiite religious factor which is the Azerbaijani Islamic Party, the Turks use the Armenian relations theme. Baku respectively uses Kurdish factor against Turkey. Therefore it is very important that today Baku and Ankara speak in different political languages. They make a good look, but it is clear that the ideological agenda of AKP (Justice and Development Party of Turkey, the party headed by Prime Minister Erdogan - Ed.) and the staff that Ilham keeps in mind have little in common," said the chairman of the Islamic Committee of Russia.

Besides that, according to Jamal, today Turkey is not the country with which Azerbaijan had formed an alliance twenty years ago. "The differences lie in the fact that politically Turkey today is anti-liberal and anti-secular, while Azerbaijan is on the contrary," he said.