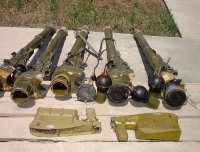 Said Amirov, Mayor of Makhachkala, dismissed from his position, Magamed Abdulgalimov, ex-Assistant of the City Prosecutor of Khasavyurt, and Yusup Djaparov, the deputy head of the city of Kaspiisk, are suspected of preparing a terror act with the use of a man-portable surface-to-air missile system "Strela-2M", found today in a hiding place in Dagestan. This was reported by the Investigating Committee of the Russian Federation (ICRF).

According to the investigators' version, the suspects were preparing an attempt on Arsen Gadjibekov, the acting head of the Investigating Division for the Soviet District of Makhachkala of the Investigating Department for Dagestan of the ICRF, to influence the decision-making of the Dagestani authorities.

The Chief Investigating Department of the ICRF has instituted a criminal case under Part 1 of Article 30, Paragraph "a" of Part 2 of Article 205 (preparation to commit a terror act), and Part 2 of Article 222 (illegal possession of weapons, committed by a group of persons by prior agreement) of the Criminal Code of the Russian Federation.

Today, to obtain evidence in the criminal case, searched were carried out in the house of Said Amirov located in the Levashin District of Dagestan. In the house, law enforcers found and confiscated the items that, according to the investigators' version, were relevant to the investigation.

It should be noted that the dismissed Mayor does not admit his guilt and calls the case fabricated. On June 2, the court pronounced the decision to put Said Amirov into custody, and on July 26, the pre-trial restriction measure was prolonged till November 11.