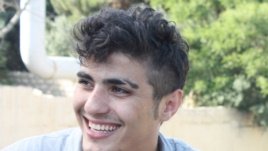 BAKU -- A satirical video clip produced by a well-known pro-democracy blogger and photographer in Azerbaijan has apparently irritated the authorities.

Mehman Huseynov of the Institute for Reporters' Freedom and Safety was detained for several hours by police in Baku on October 2. Huseynov is a member of the election team for Camil Hasanli, the single opposition candidate in the October 9 presidential election.

After his release, he said that he had been interrogated in connection with the video clip, which he uploaded to YouTube. In the video, Huseynov mixed voices from presidential debates with visuals from the 2006 Hollywood film "300."

Huseynov said investigators warned him of "possible consequences" if he continued to produce "inflammatory clips," which they said contain "a hidden call to overthrow the government." Huseynov said he will continue his activities as a blogger.