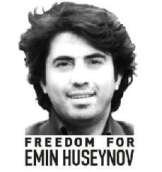 The Director of the Institute of Freedom and Safety (IRFS) Emin Huseynov from August 2014 has been forced into hiding at the Swiss embassy in Baku. This was said in a Feb. 11 statement by the Norwegian Foundation Human Rights House.

Huseynov faces charges similar to those that are imputed to the arrested human rights activists Rasul Jafarov and Intigam Aliyev, who are accused of tax evasion, illegal entrepreneurship, and abuse of power.

On the same charges to 5.5 and 3.5 years in prison were convicted the head of the Center for Monitoring Elections and Democracy Training Anar Mammadli and another activist Bashir Suleymanli.

The statement indicates that on February 11, 2015 in the program Rundschau of the Swiss channel SRF it was reported that Huseynov, since August 2014 has been living in the Swiss Embassy in Azerbaijan.

As the head of the Geneva office of the organization Florian Irminger said, Switzerland must continue to protect Emin Huseynov on humanitarian grounds. "His stay at the Embassy is justified by the level of repression in the country, fraudulent charges brought against human rights defenders in Azerbaijan, and their inability to defend themselves in court in connection with the lack of independence of the judiciary and the pressure on their lawyers," said Irminger.

The statement indicated that the family of Huseynov also faces various kinds of pressure from the authorities, due to the fact that he is hiding.

On November 10, 2014, Emin Huseynov's brother, also an employee of the IRFS, blogger Mehman Huseynov, was stopped and questioned at the airport in Baku, after which he was released.

His departure from the country was banned in connection with the criminal case initiated in the summer of 2012. Huseynov’s mother was also subjected to interrogation.

Emin Huseynov disappeared, after the authorities launched a search in the office of the IRFS, seized the equipment and documentation further noted Irminger.

Pressure is exerted on other members of the IRFS. The organization’s lawyer Gunay Ismayilova was recently attacked by an unknown man in her apartment building.

The statement also points to the serious health problems of Emin Huseynov.

Many of them are consequences of his beatings by the police in 2003 and 2008.

So the arrest of Huseynov, considering the poor conditions in the prisons of Azerbaijan, may pose a threat to the health of the human rights defender. It also notes the lack of measures to protect the health of imprisoned Leyla Yunus and Intigam Aliyev.