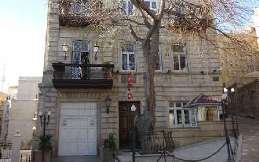 Prominent Azerbaijani media-rights activist Emin Huseynov has been living in the Swiss embassy in Azerbaijan’s capital, Baku, since last August, the Swiss government has acknowledged.

Huseynov, a government-critic who previously had been detained and badly beaten by police, had fled to the embassy to escape possible arrest.

The embassy granted Huseynov shelter on humanitarian grounds, the Swiss Federal Department of Foreign Affairs wrotethe Swiss television program Rundschau in a letter the program made public on February 11. The department confirmed that the Swiss government is in talks with Azerbaijan "to find a solution” for Huseynov’s situation.

After reports surfaced last August from Azerbaijan that he had been arrested, 35-year-old Huseynov, who ran the Institute for Reporters’ Freedom and Safety, a frequent source for EurasiaNet.org stories, was known to be in hiding at an undisclosed location.

Having been denied exit from Azerbaijan, Huseynov already had seen the telltale signs of a pending arrest  — his bank account had been frozen, his office raided by police.

Foreign Policy’s Michael Weiss, drawing on an exclusive by "sources close to Huseynov," reported that the activist, whose wife is an American, had first approached the US embassy for help, but allegedly had been refused by Chargé d’Affaires Dereck Hogan. (The US mission to the OSCE did call on Azerbaijan to stop its crackdown on "peaceful activists,” including Huseynov.) The State Department did not respond to requests for follow-up comment, the magazine reported.

Spurned by the US embassy, Huseynov opted for the Swiss embassy since it was close to the location where he was concealed from police, Weiss wrote.

But his presence puts Switzerland in an awkward position with Azerbaijan, the Rundschau program noted.

Azerbaijan has not yet issued an official statement about the disclosure of Huseynov’s location.

Reasons for why the Swiss government has chosen now to reveal Huseynov’s presence in its Baku embassy are not clear. But, arguably, the move could be intended to heighten pressure on Azerbaijan to allow Huseynov to leave the country.

The Azerbaijani government, however, which has an ever-lengthening list of arrested journalists and rights-activists to its name, is not likely to yield easily.

Still more questions likely will be raised about the alleged actions of the US embassy, long criticized by Azerbaijani activists for supposedly straddling the fence on rights-issues in Azerbaijan.

One former US ambassador to Azerbaijan, Richard Kauzlarich, told Foreign Policy that though US embassies can do little to help ordinary citizens of a host country, "if it’s the spouse of one [sic] our own, that changes things.”

In an interview with The Financial Times published on February 11, however, Ali Hasanov, Azerbaijani President Ilham Aliyev’s longtime political advisor, expressed no discomfort at the prospect of a tug-of-war with Washington over human rights.

Baku, he claimed, has no differences with the US government on this score; just with US non-governmental organizations.