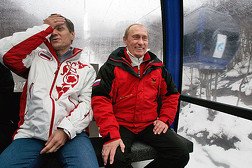 The opening ceremony of the Olympics will be held on February 7 at 20:14 Moscow time. The Fischt Stadium will gather 40 thousand spectators, and the television broadcast will be seen by more than 3 billion people. Then the Olympic marathon will start, and many wonder if the subtropical climate will be good for the White Olympics' organizers.

Roman Vilfand, director of the Hydrometeorological Center of Russia, assures, "In all Olympic facilities, the weather for the coming week is just wonderful: it is quite favorable for competitions. Since December enough snow has fallen, and this factor is very important, because natural snow is needed as the basic layer for artificial snow for ski jumping and other disciplines. The temperature is also favorable for the competitions. Air masses moving from the north cause negative night temperatures, even in Imeretinka, and in Sochi night temperatures are around zero, and it's great, not to mention the mountain cluster. Over the next 7 days the weather will be sunny, clear, frosty. From February 11, the weather will start changing, and we'll discuss it already in our newsletter."

Valery Lukyanov, Deputy Director of the Russian Meteorological Center for hydrometeorological support of the Sochi Olympics 2014, says, "Over the last four years, we have been able to learn from the experience of the Olympics meteorological service in Turin and in Vancouver, and made the project, for which a significant network of meteorological observations was created. This includes terrestrial network stations, radars, orological complexes, and much more.But our major advantage is having selected during this period a group of people who decided to try their hand in the hydrometeorological support for the Olympics...I think that in terms of preparation, RosHydromet has fulfilled almost all the tasks that we faced, and is ready to fulfil its task of ensuring the Olympics weather at a really high level."