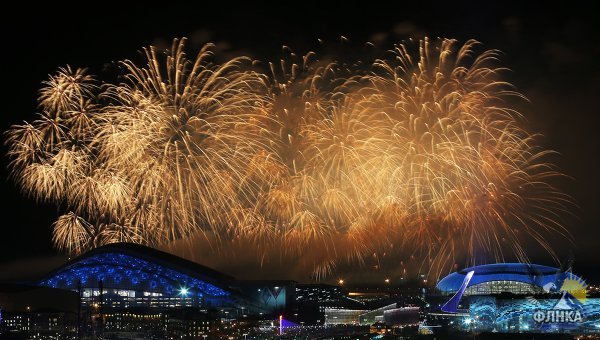 "I declare the 22nd Olympic Winter Games closed," Bach said from a podium in the center of the Fisht Olympic Stadium.

President Vladimir Putin and Bach met shortly before the opening ceremony to congratulate one another on what have been widely hailed as successful Games.

"There is no higher compliment than to say on behalf of all the participants: These were the athletes' games," Bach said to wild applause. "We arrived with great respect for the rich and varied history of Russia. We leave as friends of the Russian people. Do svidania Sochi!"

Of the athletes, Bach said: "You have excelled in your competitions. You have shared your emotions with us and the whole world."
And he praised Putin for the Russian leader's "personal commitment to the extraordinary success of these games." The Games were widely seen as Putin's pet project.
The preceding ceremony – themed "Reflections of Russia" – paid tribute to Russia's considerable contribution to the arts, feature Bolshoi ballet dancers, nods to Tolstoi and Dostoevsky as well as a rendition of Rachmaninoff's "Piano Concerto No. 2" by Russian virtuoso Denis Matsuev.

The country's great circus traditions were also on display, with flying acrobats performing around a candy-cane big top.

The show, only slightly less extravagant than the stunning opening ceremony on February 7, made a humorous reference to its malfunctioning Olympic ring.

A glitch involving a white shining snowflake that failed to unravel into an Olympic ring went viral on Twitter and has since become the butt of several gags.

But the Russian organizers looked sure to win praise for their self-effacing humor when a troupe of dancers who were to form the Olympic rings paused slightly before fanning out to create the fifth hoop.

In a final section of the ceremony, giants models of the three mascots – a bear, a rabbit and leopard – performed a dance in the arena and finally assembled around the Olympics flame.
After blowing out of the flame, the model of the white bear shed a single tear in a nod to a similar visual trick in the 1980 Summer Games in Moscow and movingly reflecting the blend of sadness and pride felt by many in the crowd.

Following the unprecedented disappointment of coming 11th with just three gold medals four years ago in Vancouver, Russia achieved its best ever result in Sochi, winning 33 medals in total, including 13 gold to top the medal table for the first time in 20 years.