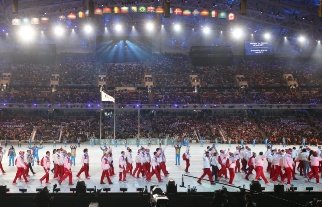 SOCHI, March 16. /ITAR-TASS/. Russia’s national flag has been raised at the Closing Ceremony of the 2014 Winter Paralympic Games in the Black Sea resort city of Sochi on Sunday night.


Russia’s national flag was brought inside the Fisht Stadium by the country’s Paralympic athletes, who won the medal count of the Games.
Audience of the full packed Fisht Stadium, which has a 40,000-seat capacity, rose to its feet at the national anthem was played during the raising of the Russian flag. The anthem was performed by the Russian State Children’s Chorus Assembly, conducted by Alexey Petrov.


Russian President Vladimir Putin and President of the International Paralympic Committee (IPC ) Sir Philip Craven are present in the Presidential Box of the Fisht Stadium during the closing ceremony.