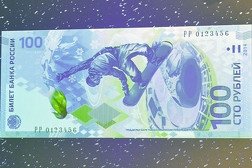 The Russian Central Bank has announced the release of special 100-ruble banknotes for the 22nd Winter Olympic and 11th Paralympic Games hosted by Sochi in 2014, the Central Bank reports.