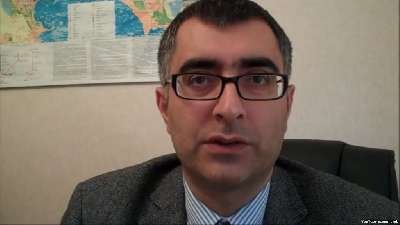 Anar Mammadov, the head Election Monitoring and Democracy Studies Center (EMDSC), who was arrested in December last year, through his lawyers answered the questions from Turan agency and the Azerbaijani service station "Voice of America." Investigation Department of the Serious Crimes of Prosecutor General's Office has been charged with tax evasion, illegal business, abuse of authority. On March 6th the term measure of restraint was extended for another three months. International human rights organization Amnesty International Anar Mammadov recognized as a "prisoner of conscience."

- Anar, what is your feeling? Was their physical pressure and moral pressure on him?

- At the moment I feel fine, there was no pressure on me. The only concern is social and political processes in the country and in the world of social and political processes , which I can not get prompt and alternative information . Unfortunately, the Azerbaijani television does not meet information needs.
- How is investigation going on? Are there any interrogations , confrontations after the arrest? Have you been subjected to physical and psychological pressure during the investigation?

- During this period I did not give evidence as a defendant . Until now, only once on October 30 last year I was questioned as a witness . The other day I was first interrogated as a defendant. The other day I also familiarized with the Act of a tax audit , carried out by experts Tax Ministry , the Ministry of Finance and the Council of State Support to NGOs . However, I was not provided a copy of the Act, it is , unfortunately, not enough to ensure my right to self-defense.

- How do you feel about the charges brought against you? What are the sources of this accusation?

- I believe that the charges against me and my colleagues are unfounded accusations (Executive Director of EMDSC Bashir Suleymanli and the head of the Public Association for International Cooperation Volunteers also are involved in this case as defendants, with them under house arrest.) I can not say what is the source of these allegations. It is the task of the investigating authorities to find out the motives and basis charges. I do not have to prove his innocence on charges brought against me. I know that behind criminal case is the political order. This is due to our ten activities in the field of election monitoring, protection of political freedoms , the empowerment of citizens' participation in the governance process. I would like to get acquainted with the logic of those who argue that we were engaged in illegal business activities.


- What is your attitude to the social protection of your rights. What else should be done?

- Local and international community immediately reacted strongly to my arrest. I take this opportunity to thank the local and international organizations , journalists and bloggers , political activists for giving me support. If to take into account that there are many arrested for political reasons in prisons and detention centers, I have no reason to complain of social protection.

- Your arrest comes at a time when the results of violations in the presidential election have been published. Do you think that this was the reason for your arrest?


- Naturally, my arrest , including a lawsuit filed against the public association "International Cooperation Volunteers", with which E EMDSC collaborated is connected with our activity before and after the presidential elections on 9 October, 2013. However, such political persecution took place not only in terms of domestic election observers. We should not forget that in early 2013 began political arrests, which resulted in the arrest of famous politicians Ilgar Mamedov and Tofiq Yagublu , leaders of NIDA Movement, the organization "Free Youth" , a large number of civil society activists. As it turned out, during 2013 the authorities not only failed to comply with the principles of political pluralism and citizen -state dialogue , but did not express the political will even to simulate this. What about tough attitude y authorities towards EMDSC, the approach would be within the framework of political and legal constraints established for domestic election observers for years.

When in 2000 the Milli Majlis adopted the law "On NGOs" an article hindering the observation of activities of NGOs funded from abroad was added the document. Even when the article was canceled, political restrictions and prohibitions were not eliminated As an example, the fact that three months before the 2008 presidential election the registration of the Election Monitoring Center (EMC) was annulled. Ongoing professional and impartial work within EMC and EMDSC has won the trust of the local and international community. Since the 2005 parliamentary elections , our reports on election observation CoE, OSCE , international NGOs and the media were regarded as a reliable and alternative source . The authorities’ attitude to our work and the trust of the international community of our activities was uncompromising. This attitude was exacerbated usually during the presidential elections . After the presidential elections on reports and opinions referred EMDSC, EU, OSCE, Council of Europe , state and non-state actors the United States , Germany, Norway , the Netherlands, the international media . Behind this attitude can be traced the intention to belittle EMDSC authority in the eyes of the general public. However, this method is obsolete, and in the modern world is democratic and efficient.

- The other day you were familiarized with act of financial audit. What in general , you can say about this document? Is it reliable?

- After reading the act of checking first impression was that the experts who prepared the document, or are not aware of reports of non-profit organizations, or they worked on request. Their attitude to the Act, we will notify the end of the investigation. While I can only say that this process did not have to involve representatives of the Council of State Support to NGOs , because the principles of structure, considers itself a national donor, vary with the principles of international donor organizations , with whom we cooperate. Furthermore, the independence of the structure (the Council for State Support to NGOs under the President of Azerbaijan) has always been a doubt and Act added to the criminal case against the EMDSC confirm that our doubts are not unfounded.