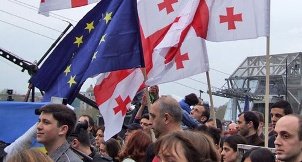 In Georgia, most political analysts questioned by the "Caucasian Knot" correspondent applaud the signing of the Association Agreement with the EU. Meanwhile, they have noted a number of shortcomings committed by the Georgian Government.

Let us remind you that on June 27, in Brussels, Irakli Garibashvili, Prime Minister of Georgia, signed the Georgia-EU Association Agreement. The document envisages integration of Georgia in the EU free trade zone.

The very signing of the Association Agreement has been conducted too hastily. This opinion was expressed by Gulbaat Rtskhiladze, Director of the Georgian Eurasian Institute. According to him, it was a mistake to accept the Agreement without public discussion.

Georgy Gvimradze, a political analyst and an expert of the "Centre for Strategic Studies", also believes that the Georgian Government paid too little attention to the need to get Georgian citizens be thoroughly acquainted with the conditions of the Georgia-EU Association Agreement.

Meanwhile, Georgy Gvimradze positively assesses the Association Agreement. "It confirms that we have made the right move when we had chosen our foreign policy orientation," said Georgy Gvimradze.

Archil Chkoidze, the head of the Georgian NGO "Irakli II Society", has voiced his unequivocally negative assessment for the signing of the Georgia-EU Association Agreement.

According to the head of the NGO "Irakli II Society", Georgia should better make more steps in the direction of the Customs Union with Armenia, Belarus, Kazakhstan, and Russia.